The consulting firm specialized in marketing science Sociograph has tested nearly thousand participants in Sevilla to analyse the impact that sound and music have on media content and video games as an educational resource. It was aimed to give answers to the project developed by the University Loyola Andalucía and sponsored by the BBVA Foundation, ‘La Escucha Inconsciente‘[the unconscious listening].

Under this research addressed by Francisco José Cuadrado Méndez, professor in Audiovisual Communication and Advertising at the University Loyola Andalucía, aimed to identify how different sounds have an influence on students’ emotional reactions and attentional levels, Sociograph have monitored more than 330 children from the 4th, 6th and 10th grade at San José Sagrados Corazones and Padres Blancos school during two weeks.

Therefore, a tablet and headphones were handed to each student from the three segmented groups together with Sociograph’s wristband to measure their electrodermal skin response when being exposed to the following stimuli: a video game developed by the University of Sevilla, a podcast and a sequence, being all of them tested in different sessions. 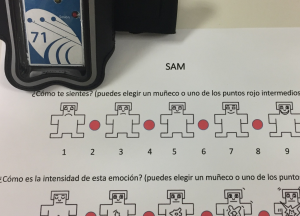 Cuadro Méndez, in an interview to Radio Córdoba (Cadena Ser), has explained that this study is based on the assumption that each individual perceives the sounds, differently, according to what the creative direction of the stimulus said before mentioning the main aim of this project focused on learning improvements: “the sound impact is different when listening to without an image”.

In this sense, the professor also believes that generating a higher emotional impact encourages a better learning, “as verified”, as well as when someone drives a task in which is emotionally involved “he feels good, confident and the emotions are positive, generating these a higher interest in what this person is doing”.

‘La Escucha Inconsciente‘ counts with the collaboration of Genera Games, New Audio Technology, BQ, Bitalino y Aula de Juegos as well as those agents already mentioned, the schools and Sociograph. The methodological design of this project allows to triangulating data through the electrodermal measurement of the attentional levels and emotional reaction, pre and post-test of the emotion perceived by the individual – with the Self-Assesment Manikin Scale (SAM) — and the collection of the think-aloud. 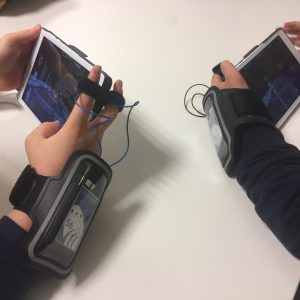 The performed protocol for the task consisted of a brief explanation, placement of Sociograph’s wristbands, pre- and post-test (SAM), the think-aloud testing, evaluation task of leaning, removal of wristbands and farewell. All information obtained reminds confidential and protected as well as this project satisfies the conditions laid down by University Loyola Andalucía and Junta de Andalucía [the Regional Government of Andalusia].

The motivation, relevance and innovation of the project come from the increase on the society about the media sector, both in the video game industry and virtual reality computer system sector, which implies the use of sound reinforcement systems as follows: Atmos by Doldy or Headphone:X by DTS. The impact of such systems and the lack of prior studies to specifically aboard this topic are key factors to justify such research. On the other hand, the relevance of the educational dimension of the project bets on a more effective learning. Thus contributing to a higher media alphabetization through the sound as a medium of expression and encouraging an efficient used and motivating information and communication technologies (ICT) as well as powering a learning based on multiple intelligences (Gardner, 1983) allowing other forms of interaction.

Conecta Fiction with a live neuroscience demonstration by Sociographblog

Innovative approaches for the media sector addressed to professionals and studentsblog